It is a great honor for the Emerging Science Journal to be accepted for inclusion in Scopus. 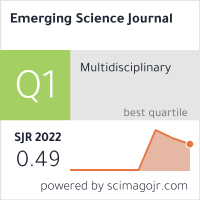